Indonesia's Government Sets Out to Rescue Microenterprises from the Pandemic Impact

JAKARTA, Indonesia, Nov. 17, 2020 /PRNewswire/ — The government strives to rescue microenterprises from the impact of the Covid-19 pandemic. Given its vital role, the microenterprises sector has become a priority in the national economic transformation which is also supported by the Covid-19 Handling and National Economic Recovery Committee (KPCPEN). This was revealed in the "Dialog Produktif" dialogue with the theme "The Frontline Fighters for the Economy: Micro-Business Entrepreneurs" which was held by KPCPEN on Monday (9/11). 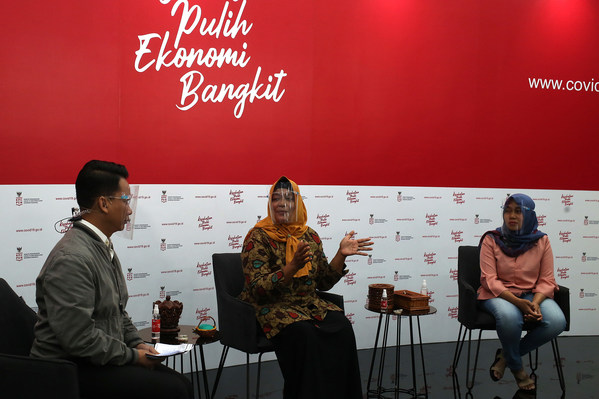 Government Saves Micro Businesses from the Impact of Pandemic.

The government launched the Bantuan Presiden Produktif Usaha Mikro (BPUM/Productive presidential aid for microenterprises) in August 2020. As of October, BPUM has reached around nine million microenterprises. Meanwhile, each BPUM recipient receives Rp2.4 million in grants. For the next step, the total number of microenterprises who will receive these grants will increase to 12 million.

"Alhamdulillah, after receiving BPUM, I was able to expand my food stall. I was also able to start a gorengan (fritters) business. I utilized the vegetables my mother sells so that they do not go to waste," said Iis Suminar, a pecel, karedok, gado-gado (Peanut sauce-based salads) entrepreneur who received BPUM, at the "Dialog Produktif" dialogue with the theme "The Frontline Fighters for the Economy: Micro-Business Entrepreneurs" which was held by the Covid-19 Handling and National Economic Recovery Committee (KPCPEN).

BPUM was initiated by the government to help microenterprises who have not yet been reached by banking services (unbankable). Offered in the form of grants, BPUM also serves as an alternative financing scheme for microenterprises. According to the latest data from the Ministry of Cooperatives, Small and Medium Enterprises (KemenkopUKM) in 2018, the number of business units at the national level was recorded at around 64 million, and microenterprises take up the largest portion which was around 63 million (98%).

As one of the unbankable, Iis really felt the benefits of this government aid. Iis, who sells gado-gado everyday, has never used an ATM. In order to obtain BPUM, Iis ventured to ask the village authorities, then visited the bank to fulfill the necessary requirements. Initially, Iis was hesitant to visit the bank. "I asked the bank security about the UMKM (SMEs) funds. You see, I first got the information from social media," Iis explained.

Besides BPUM, Iis also applied for Super Micro People’s Business Credit (KUR). The program is a business loan with an interest rate of 0% until December 31 2020. Furthermore, KUR will charge 6% interest with a maximum loan limit of Rp10 million.

It was not only Iis who was grateful and managed to expand her business after receiving government aid. There is also Suwanti, a craftsman that makes waste-based souvenirs. She had also very much felt the positive effects. According to Suwanti, during the pandemic, her business turnover decreased drastically. Moreover, wedding parties and large-scale activities were banned during the Large-Scale Social Restriction (PSBB. In fact, these activities are the main sources of income.

"For me, this Rp2.4 million aid is like getting drinking water in a desert," said Suwanti.

Suwanti knew about BPUM through the UMKM (SME) group she participated in. At first, Suwanti also had doubts about this information. However, she still takes care of the requirements at the Bogor municipal government.

"We submitted the application on September 20, and the aid was disbursed on September 25. The aid was then transferred directly to my BRI bank account," she said. Just like Iis, Suwanti also received a KUR Super Micro business stimulus aid worth Rp10 million. These funds are used to buy work tables and spray paint tools for business equipment.

In Support of Local SME Products

Receiving government aid is meaningless without a fighting spirit. Suwanti and Iis refused to give up. Persistence enabled them to survive with the help of the Government.

In particular, Iis expressed her gratitude to President Joko Widodo for this opportunity. "I thank Mr. Jokowi. My business got help, because during the pandemic the turnover had decreased. Alhamdulillah, after receiving the aid, my business turnover has increased. Hopefully the future conditions will get better and improve," said Iis.

Meanwhile, Suwanti invited the public to support Indonesia’s UMKM (SMEs). "To all people, hopefully we will be moved to use goods made by UMKM so that we can move forward further. Also, I thank Mr. Jokowi for supporting the UMKM. The government aid is helpful for SMEs so that our businesses can thrive again," said Suwanti.