SINGAPORE, Oct. 3, 2018 /PRNewswire/ — The CEO Connection® has named Gina Fyffe, Chief Executive Officer of Integra Petrochemicals Pte Ltd and Exec. Director of Integra Holdings, one of the Top 25 Most Influential Women of the Mid-Market. The distinction honours women who have the power to influence change, innovation, and standards of excellence within mid-market companies (companies between $100 million and $3 billion in annual revenue). 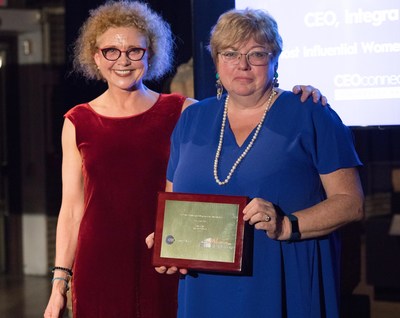 Honourees are evaluated by a number of metrics including annual company revenue, number of employees, social media influence, and importantly community involvement.

"It is an honour to receive this recognition from CEO Connection here in Pennsylvania and on such a famous campus. This award is recognition for all the people from Integra who have worked alongside with me, establishing Integra as a leading petrochemical trading company since 1989," said Gina.

Gina is Scottish and graduated from the University of Edinburgh in Biomedical Sciences. The early part of her working life was with Exxon Chemical in both the UK and it’s international HQ in Belgium, before founding what is now the global petrochemical trading company Integra Petrochemicals (Annual Turnover of US$1.5billion) in 1989.

The company’s headquarters moved to Singapore in the early 2000’s. Early this year, the company moved from being family controlled to part of a Hong Kong stock listed company and part of the Cedar Holdings Group, one of China’s largest private conglomerates and ranked number 361 on the Fortune 500 list.

Over the years, Gina and her husband have added real estate and construction companies and an Asian based shipping company-with 16 tankers to the family portfolio. Concerned about food and water availability, has led the family into sustainable shrimp farming across South East Asia and a few soft commodity projects in recent years.

As a mother of 2 children, she has directed the family’s charitable efforts into high risk obstetrics, foetal and maternal health, child education and the drive for universally safe drinking water.