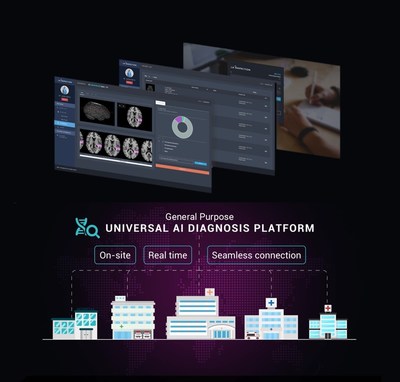 JBS-01K has been first approved by Ministry of Food and Drug Safety (MFDS) of South Korea as an AI-based class III computer aided diagnosis system.

Caused by a blood clot in patients’ brain, ischemic stroke leads them to aftereffects and reduced performance in exercise ability. As South Korea is becoming an aging society, it is expected that the number of ischemic stroke patients will increase rapidly. Ischemic stroke has different treatments and prognosis by its occurrence subtypes, thus it is crucial to identify the stroke subtype. To analyze brain MR images of patients enables exact stroke subtype classification, quick and appropriate treatments, and a better prognosis.

JBS-01K is developed by JLK Inspection’s own AI technology. It is an AI-based medical image diagnosis-supporting system which assists medical specialists in diagnosing the cause of ischemic stroke more than detecting brain lesions. When brain MR images and atrial fibrillation presence of patients are entered into JBS-01K, this software shows the probability of four ischemic stroke subtypes to support the physicians and their diagnosis.

The MFDS of South Korea uses a four-class classification of medical devices by their intended use and potential hazard to human. More specifically, an AI-based medical device is classified according to how the device shows the diagnosis results. ‘Computer aided diagnosis software’, which analyzes medical images and automatically shows the probability of presence, severity, or condition of the diseases, is classified as class III, while class II includes ‘analyzer, medical image, software’ and ‘computed aided detection system’ which shows the area of medical images.

JBS-01K is currently the only medical device classified as ‘computer aided diagnosis software’ (A26430.14) and approved by the MFDS through a large-scale and multi-center clinical trial for safeness and effectiveness.

In 2017, the first investigation application of AI-based medical device in class III for JBS-01K was approved by the MFDS. The multi-center clinical trial was conducted for five months at Dongguk University Ilsan Hospital and Seoul National University Bundang Hospital, and it used the medical data of 1,089 subjects, which was a large-scale clinical trial the world had never seen before regarding AI-based medical device.

The clinical trial was conducted to compare neurologists and JBS-01K independently in terms of the diagnosis results of ischemic stroke subtypes. Assuming JBS-01K as the medical specialist level, an evaluation of the results to check the agreement between JBS-01K and neurologists did prove that performance of the AI-based software is as high as the level of medical specialists according to the multi-center clinical trial with 1,089 subjects.

Made by using big data of brain MR images and clinical information together with the team of neurology professor Dong-Eog Kim of Dongguk University Ilsan Hospital, JBS-01K can provide a data-based quantitative analysis of ischemic stroke subtypes and help the physicians to give patients personalized diagnoses and proper treatments. The use of JBS-01K is expected to improve the prognosis and the life of each patient and reduce the social cost of a nation. In the case of South Korea, the number of MRI units per each million people is 26.3, which ranks fourth according to the OECD data in 2015. This is why JBS-01K is expected to be widely used in not only big hospitals but many medical institutions with MRI units in South Korea.

Meanwhile, JLK Inspection has applied for FDA Approval Submission for JBS-01K and is finding various ways to enter the overseas market such as China and Europe with its international partners.

In addition to JBS-01K, JLK Inspection has built CT-based and MRI-based solutions which cover the whole range of hyperacute and acute cerebrovascular diseases. An AI-based dementia diagnosis platform is currently in development and it will be released in the market to treat the patients as soon as possible. JLK Inspection becomes a global leader in the medical industry with their own AI technology development to save people against varied diseases professionally.