Gose is a traditional style of beer in Germany featuring salt and coriander and brewed with lactic acid. It is distinguished by a refreshingly acidic and salty taste and subdued bitterness. Gose-style beers using different blends of fruits and spices are available around the globe. In Sudachi Ace Gose, the refreshing acidity of the juice from two types of Japanese citrus fruits – sudachi and kabosu – is combined with the spiciness imparted by the coriander seed and the brewing process, as well as the light salty flavor from shio-koji, a Japanese seasoning made with salt and malted rice, to produce a unique and refreshing drink.

Widmer Brothers Brewing is a brewery based in Portland, Oregon, established in 1984 by two brothers who wanted to make their home-brewing hobby into a proper beer-making enterprise. Its flagship Hefe, which is a traditional German style of beer brewed with malted wheat and whose white and cloudy appearance is the result of the yeast not being filtered out, has won numerous awards. The collaboration between SVB and Widmer Brothers Brewing at the "Fuji to Hood" beer festival in Portland in April this year, which saw eleven teams of Japanese and Portland breweries sell small batches of collaboration beer, led to the development of Sudachi Ace Gose.

Kirin Brewery Company Ltd., is engaged in a range of activities to enhance beer’s appeal, including the Spring Valley Brewery, which works with beer enthusiasts to craft the future of beer.

The Kirin Group is working with customers to create a new culture for beverages, making people and the community happier and richer. 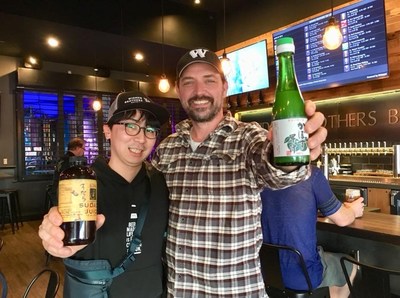