SEOUL, South Korea, May 16, 2018 /PRNewswire/ — Bagel Labs today announced the start of its Kickstarter campaign to introduce its second internet-connected smart measuring tape, the PIE. Bagel Labs will run the campaign through June 16, and has set a goal of $30,000 to begin the manufacturing of its product.

Differentiating itself from the myriad of fitness trackers and smart scales in the market, the PIE smart tape measure focuses on helping users easily capture their body sizes for fitness and health purposes. PIE allows users to simply wrap its flexible fiberglass tape around any body part. The tape tip comes with a slit opening that can be securely locked to PIE’s hook to provide an effortless measuring experience. PIE also comes equipped with a fastening gear that the user can turn to adjust the tape to a snug fit. Bagel Labs’ patented sensor technology accurately calculates length, and the measurement instantly appears on the digital display.

PIE’s smart component comes into play through its complementary Android and iOS apps, which allow users to save and analyze their body measurements on their smartphones. With just a click of a button on the PIE, measurements are saved to the PIE app via Bluetooth. Users can set even set a goal for each body part and track progress. 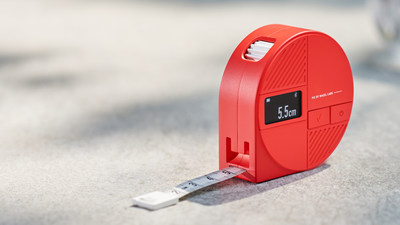 "Bathroom scales don’t tell the whole story when it comes to health and fitness tracking," said Soohong Park, CEO of Bagel Labs. "In fact, changes in body weight alone can often be misleading because muscle weighs much more than the same volume of fat. Being able to accurately measure body sizes and keep track of changes will greatly help users gain more insight into their workout progress and stay motivated."

The PIE smart tape measure starts at $39 for early comers. Pre-orders can be made via the Bagel Labs’ Kickstarter page.

Bagel Labs is a South Korean startup focusing on innovating the way people measure size. The PIE’s crowdfunding campaign is the sequel to that of the Bagel smart tape measure, which raised $1.3 million through Kickstarter in 2016. For additional information, please visit https://www.bagel-labs.com.