Joint effort by Tiger Beer, WWF and KENZO seeks to drive global awareness for the cause through unique collection inspired by wild tigers 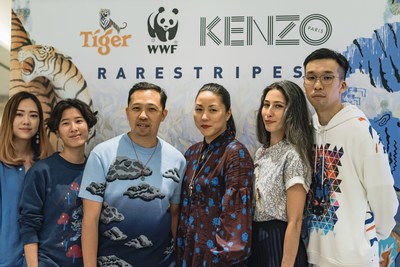 Talking to guests and media at the launch event, Venus Teoh, International Brand Director for Tiger Beer, shared: "True to our spirit of uncaging creativity and providing a platform for emerging talent to the world, Tiger Beer has brought together our partner WWF, the co-creative directors of KENZO, Humberto Leon and Carol Lim, and four handpicked young artists to create the limited edition Rare Stripes collection."

"This collection is another one of the ways we’re raising global awareness and funds for endangered wild tigers. We want people to take action to save the wild tigers, our beloved brand icon, from extinction," she continued.

Michael Baltzer, Leader of Tigers Alive Initiative (WWF) added: "Every day we see tigers used in popular culture – in fashion motifs, on premium products and on billboards. Yet, tigers in the wild are in danger of becoming extinct. WWF is a leader in an ambitious global effort to double wild tigers but the tiger needs every help it can get. We are therefore delighted to have this powerful partnership with Tiger Beer and KENZO. We hope it sets a new wave of action and awareness from other brands for wild tigers."

KENZO’s co-creative directors, Humberto Leon and Carol Lim and the four emerging artists that designed the collection were also present to launch the collection. Urging guests to lend their support to the cause, Humberto shared: "Carol and I had been hoping to work with WWF for some time and we were delighted that Tiger Beer brought us together. We hope our collaboration with WWF and these four great artists for this important cause will inspire people around the world to learn more about saving wild tigers. The reality is that if we don’t take action now, we could very easily lose these animals forever."

The four artists hailing from Cambodia, Malaysia, Singapore and the United States also drew inspiration from their trip to Cambodia where they worked closely with Leon and Lim to design the collection and heard from Phurba Lendhup, a WWF Wildlife Specialist from Bhutan, first-hand about the plight of wild tigers.

The launch event, which hosted over 150 guests and members of the media, provided an exclusive preview of the eight unique designs available for sale in the collection, aptly displayed within coat hangers fashioned out of snare wire traditionally used in poaching, in a bid to further drive home the plight of wild tigers.

The Rare Stripes collection officially drops at 3pm on July 21, with a limited number available via selected KENZO retail stores internationally from the beginning of August. 100% of the proceeds from the sale of the collection, which is made using Global Organic Textile Standard (GOTS) compliant organic cotton, will go to WWF in support of doubling the world’s wild tiger population.

This is the second year of a six-year partnership between Tiger Beer and WWF to support WWF’s global efforts in tiger conservation. The first year of the WWF partnership featured the successful #3890Tigers campaign, which invited people from around the world to pledge against illegal tiger trade by merging their ‘selfies’ with one of six bespoke tiger artworks created by global artists using the power of Artificial Intelligence (AI) technology.

For more information about the Tiger Beer x WWF partnership, their collaboration with KENZO and the Rare Stripes collection, please visit http://tigerbeer.com/rarestripes and #rarestripes.

For hi-res visuals of the Rare Stripes collection and the launch event, kindly download them here.

ABOUT TIGER BEER:
Tiger Beer was born in 1932 on the streets of Singapore. A stone’s throw away from the equator, its unique tropical lagering technique meant it was able to brew a beer that would keep Asia cool. In 2015, it started using the rays of the tropical sun for brewing, with over 8,000 solar panels installed on the rooftop of its facility in Singapore. Now, every Tiger Beer consumed in Singapore is brewed by the sun. Furthering its commitment towards global sustainability, 2017 has also seen Tiger Beer take Air-Ink, the world’s first ink created from air pollution, to the streets of the world through creative collaborations with the best emerging artists, creating beautiful artworks out of pollution. Tiger Beer is the number one premium beer in Asia, and the world’s fastest growing premium beer, available in more than 50 markets across the globe. For more information, please visit http://www.tigerbeer.com .

ABOUT HEINEKEN:
HEINEKEN is the world’s most international brewer. It is the leading developer and marketer of premium beer and cider brands. Led by the Heineken® brand, the Group has a portfolio of more than 300 international, regional, local and speciality beers and ciders. We are committed to innovation, long-term brand investment, disciplined sales execution and focused cost management. Through "Brewing a Better World", sustainability is embedded in the business and delivers value for all stakeholders. HEINEKEN has a well-balanced geographic footprint with leadership positions in both developed and developing markets. We employ over 80,000 employees and operate breweries, malteries, cider plants and other production facilities in more than 70 countries. Heineken N.V. and Heineken Holding N.V. shares trade on the Euronext in Amsterdam. Prices for the ordinary shares may be accessed on Bloomberg under the symbols HEIA NA and HEIO NA and on Reuters under HEIN.AS and HEIO.AS. HEINEKEN has two sponsored level 1 American Depositary Receipt (ADR) programmes: Heineken N.V. (OTCQX: HEINY) and Heineken Holding N.V. (OTCQX: HKHHY). Most recent information is available on HEINEKEN’s website: http://www.theHEINEKENcompany.com and follow us on Twitter via @HEINEKENCorp.

ABOUT WWF:
WWF is one of the world’s largest and most respected independent conservation organizations, with over 5 million supporters and a global network active in more than 100 countries and territories. WWF’s mission is to stop the degradation of the Earth’s natural environment and to build a future in which humans live in harmony with nature, by conserving the world’s biological diversity, ensuring that the use of renewable natural resources is sustainable, and promoting the reduction of pollution and wasteful consumption. Visit http://www.panda.org/news for latest news and media resources and follow us on Twitter @WWF_media.

ABOUT KENZO:
KENZO was founded by Japanese designer, Kenzo Takada in Paris in 1970. With its colorful prints and declaration of freedom, KENZO shook up the couture codes of the time by irreverently breaking the rules. In 2011, Humberto Leon and Carol Lim took post as Co-Creative Directors. At the core of their approach, travel, culture and fashion manifest in all that they do. KENZO has become known for its groundbreaking collaborations with avant-garde artists, musicians, actors, and designers. During their time at KENZO, Carol and Humberto have created a successful perfume, "KENZO World", introduced a new line "KENZO – La Collection Memento" and have opened new stores in Paris, Barcelona, Tokyo, Seoul and Shanghai.

Where to Eat, Play and Buy for the Lunar year, Changing the World by Consumption