Mexico Falls in Love with Templestay and Temple Food 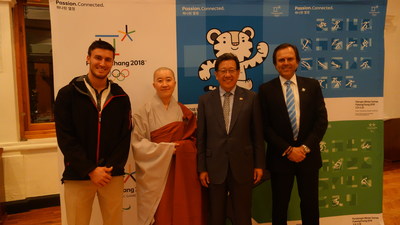 The aim of the Cultural Corps of Korean Buddhism’s (President: Ven. Wonkyeong) event was to introduce Templestay and Temple food to promote traditional Korean culture and raise awareness for a successful 2018 PyeongChang Winter Olympics in Korea. This event was sponsored by the Korean Cultural Center of Mexico (Director: Song Gi-jin).

With a theme of "Secret to Health: Korean Temple food," a lecture, demonstration and sampling event took place at Hacienda de Los Morales on November 28. Many VIPs from politics and media attended the event, including Korean Ambassador to Mexico Jeon Bi-ho; IOC member Jorge Armijo; Carlos Pruneda, the head of the Mexican Olympic team; Robby Franco, member of the Mexican ski team; and columnist Paul Cortes. Ven. Hyungmin, who gave the lecture, presented temple food and demonstrated how to make flavored rice with lotus root, thistle rice cake with soy sauce, and boiled tofu and burdock.

Franco said, after sampling the food, "Tasting this food today made me feel healthy. I plan on staying in Korea for a week after the Olympics, and I hope to meet the monk and eat more temple food." Among the dishes presented for sampling were thistle rice cake with sauce, a dish with savory mushrooms and spicy red pepper paste. The Mexican Olympic team was given a lotus flower incense box as a gift from the Cultural Corps of Korean Buddhism, wishing for a successful hosting of the 2018 PyeongChang Winter Olympics and harmony between Korea and Mexico.

From November 29 to 30, another event for making tea confectionery and temple food was hosted for students attending culinary school and the general public, with 120 people visiting the Korean Cultural Centers of Mexico participating. Expressing gratitude to participants who came a long way just to attend this event, the Cultural Corps of Korean Buddhism gave notebooks with information on Templestay and food as souvenirs.

Meanwhile, other events with lectures, Temple food sampling, brass rubbing and postcard writing for Templestay and Temple food will take place in Argentina and Brazil December 5 – 9.

No. 1 K-Beauty Brand d'Alba Makes Inroads into the US Market

How to Keep Health & Wellbeing in Check with HONOR